Sylvain Papatie and Charlotte Poucachiche are Anicinabe artisans based in Lac Simon, where they have been sharing their passion for sewing and cooking for many years. In addition to teaching the Anicinabe language to the youngest children at the community school, Charlotte lends her cooking skills to the collective kitchen to facilitate moments of encounter where the language can be spoken and transmitted. She and Sylvain make original clothing and accessories, including mizipizin (cloth baby carriers), to enable those around them to carry their culture into their daily lives. Whether they have their hands in the dough or their eyes riveted on a piece of sewing work, the couple has the same wish: to do their part in transmitting their cultural heritage.

“Today, I do this so that people don’t forget their culture.”

Charlotte says she grew up in a kitchen. Her mother and grandmother would bring her to events where they lent their cooking skills and little Charlotte would watch. When it was her turn to wear the apron, she became a dedicated “community cook”. She was the driving force behind Meals on Wheels and the Lac Simon collective kitchen.

It was also through observation that she learned to sew. After the death of her mother, Charlotte revisited her memories and continued her learning through trial and error. One night, she had a dream that upset her. An infant was lying in front of her and was being eaten by flies. Charlotte realized it was her grandson and helplessly begged her mother to make a mizipizin to keep the boy safe. The Elder refused, explaining to her daughter that it was time for her to get back on track with her culture and become independent. When she emerged from her dream, Charlotte gathered her material without saying a word and got to work. Since that day, the sewing machine is never far away, and Sylvain supports Charlotte in her projects. He does the sewing on the machine while she does the work by hand and together, they form a bonded team.

Sylvain comes from the Anicinabe community of Kitcisakik, where he grew up with the sound of his mother tongue. He began learning his art as a teenager in Grand-Lac-Victoria, before taking a thirty-five-hour machine sewing course in Val-d’Or in his early twenties. What began as a challenge, a way to prove his abilities, gave birth to a true passion that accompanied him all his life and offered him an avenue to rediscover his culture. He felt the urge the day he realized the impact his work could have on those around him: “My motivation changed tremendously,” he says. I saw a glimmer of hope in people’s eyes that I was doing this right and that’s why I kept going. Sylvain finds his greatest reward in seeing people in his community wearing clothing and accessories that celebrate their culture.

“When I sew, I am in my own world. I love it when my wife tells me that what I’m doing is beautiful, because it encourages me to keep going and improving. I get better every time.” 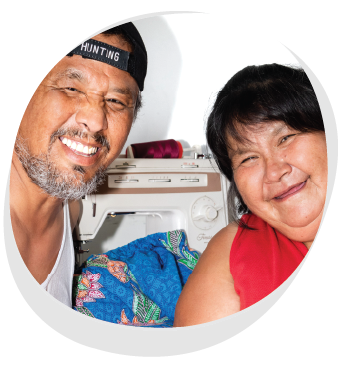