Pinock Smith is a traditional artisan of the Anishinaabe community of Kitigan Zibi. His work, performed and shared with authenticity and love for tradition, has brought the Anishinaabe culture across the Canada and beyond. Smith, well known for making birch bark canoes, masters the art of making toboggans, wigwams, tikinagans, paddles, drums and bark baskets, to name just a few. He also contributed his talent to projects blending tradition and modern art. Smith’s strong willingness to share has led him to perform demonstrations and workshops on crafts and tradition. He appeared in episodes of TV series Bushcraft Survival and Northern Wilderness, in which he showed how to make bark canoes and traditional snowshoes. Besides his skills, Smith wishes to pass on a vision of the world, the vision his ancestors taught him through traditions. He reminds us that traditional objects tell their history and talk about the land. Each one of his workshops is an invitation to slow down and become imbued with the deep meaning of thins around us : nature, search for harmony, handicraft and our ancestors’ ingenuity.

« What I really enjoy about my culture, when I’m working it, it’s that it gives you an appreciation of my ancestors’ intelligence. »

Smith was raised in a time when crafts was performed out of necessity; because job opportunities in his community were limited at the turn of the 1950s, it was a means to make a little bit of money, but mostly a way to make objects essential to everyday life. He watched his grandfather and uncles make bark canoes, sleighs and snowshoes, which they needed to go from one place to another. Right from his childhood, Smith learned to make his own toys. It was already central to everyday life and today, the objects tell a story: his and his ancestors’.

« In the old days, your education was starting the day you were born. When they put you in a tikinagan, a cradle board, your mother would carry you around and when she was working, she would lay you against a tree or hang you on a tree and you would observe all that’s around you. You were the same height, they would not drag you on the ground, so everything your mother was seeing, you would see too. You were never taught, but you’re not self-taught; you were taught by example and all examples were good, because, in my culture, everything comes down to one word and everybody would live accordingly: respect. Respect for oneself and respect for everything around you. »

Smith decided to quit his job as a carpenter in the early 1990s to reconnect with his heritage. He remembers telling his wife: “I quit my job. I’m gonna build a canoe”. He went to see his uncle, who was over 80 at the time, to break the news. “You can’t do that, his uncle said, you’ll need me to help you.“ Smith had the immense pleasure to work with his uncle and learn from him until his passing away. The spirit of the time was one of curiosity, and Smith soon discovered big cities like Ottawa. He never returned to work as a carpenter, and decided to dedicate most of his life to perpetuation and transmission of Anishinaabe know-how.

Behind the simplicity of his teachings, there is a message of great value: the ingenious simplicity of Anishinaabe craft methods reflects the resilience of this people, who have lived harmonious existences on a land known for its harsh climate. This is what Smith wishes to pass on to the young generation: a renewed appreciation of one’s legacy, identity and, ultimately, a renewed appreciation of oneself. Because Anishinaabe crafting does not require specific measurements, Smith leaves place to imperfections and fosters development of self-confidence and instinct.

« You can put a canoe together in five days. Ten days is better, of course, and ten months is even better! Take your time. »

His being the bearer of a tradition that dates back several thousands of years does not make Smith a captive of the past. In the forest, he takes what he needs, as he would do in a dollar store. He simply adores his electric drill, and he has no problem replacing bear fat to make glue by commercial fat sold in supermarkets. “My grand-dad didn’t have those tools, but adapted very well to his environment. Like him, I adapt to the environment in which I live. The man is an Algonquin, not an idiot”, he says, laughing heartily.

The fact that Anishinaabe tradition has survived thousands of years is proof that it has successfully adapted to the environment. He is nonetheless anxious about the future. On the one hand, the abuses imposed on nature weaken the sustainability of resources required to perform his art; on the other, culture and tradition are losing their grip on the life of the young generation. Smith believes that preservation of both is inseparable, for crafting is a gateway to the relationship of man with nature. In a time when the global balance is threatened at unprecedented levels, Smith remains confident that the messages of Anishinaabe tradition – respect, fair sharing and simplicity – can bring people together and shine the light towards a change that is profitable to all.

« We’ve gone so far in polluting the world that we can’t live off the land anymore. […] The Native way of life was very simple: you took from nature, you had respect for nature. Be respectful and simplify your life would be a good place to start with. » 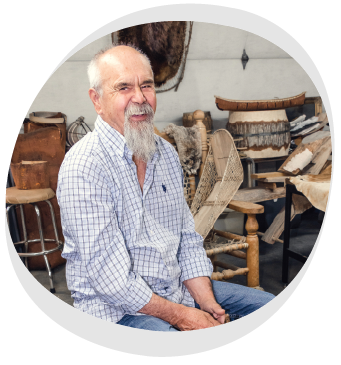