A professional filmmaker, Kigos Papatè, best known as Kevin Papatie, was born and raised in the Anishinaabe community of Kitcisakik. His creations are easily recognizable with their strong and symbolic images interacting with elements of nature. Papatè combines modern techniques and the timeless beauty of his ancestral territory to explore the various facets of the Anishinaabe reality. The artist’s films are considered as being both documentary and experimental. “I make video poetry,” he says. While cinema is the essence of his art, his work is not limited to filmmaking. Papatè enjoys exploring different forms of art, including sculpting and music. He has participated in several exhibitions throughout Quebec, and his involvement with Minwashin – of which he is a founding member – gives him the opportunity to work actively toward revitalizing the Anishinaabe culture.

« When I create something, I always aim at raising awareness. My work is about injustice and history. Doing so nurtures my hope. We are still here. We must not abandon hope! »

A filmmaker, cameraman and sound recorder, Papatè writes and directs all his films, which have traveled the world and saluted by many awards at many international festivals. Such is the case for Wabak (2006), which won the award for best experimental film at the 2007 Winnipeg Aboriginal Film Festival and the Mainfilm Young Hope Award at the First Peoples’ Festival. L’Amendement (2008) was presented before Denys Arcand’s L’Âge des ténèbres before thousands of people in a hundred or so movie theatres across Quebec. This short film also won the award for Best Indigenous Language Production at the 2008 ImagineNative Festival.

Papatè makes short films in his native language (with subtitles) on the reality of those around him. His work is characterized by the diversity of unique techniques, which combine technological innovation and intrinsic forces of nature. He prefers creating visual effects directly in the forest rather than on a computer; one technique consists in projecting images on water and bark. His ingenious approach led to the creation of a unique visual vocabulary that is deeply inspired by his ancestral culture.

« [Our language] has a long history. It is still alive and I am one of the few lucky people who have learned it and still speaks it. Ensuring that our young people continue to learn and use it is one of the missions I have chosen for myself. The Anishinaabe language must not remain a murmur. »

While his techniques have evolved significantly over the years, Papatè has nevertheless kept faithful to issues dear to him. To direct his very first short film, Anicinape Madiziwin (2004), he spent time with elders of his community, listening to their vision of history. After the death of some of those elders, Papaté measured the priceless value of the testimonies he had gathered for making his film. In the summer of 2019, Papatè undertook a grand tour of the Anishinaabe territory to meet elders and make a portrait of his ancestral language, its history, diversity and future. Anicinapemowin (Let’s speak Anishinaabe) was presented in 2019 at the second edition of Miaja, a major event on Anishinaabe language held by Minwashin. Papatè hopes that his work can bring different generations together and, most importantly, mobilize the youth. « There is a disconnect between generations, and I don’t want this to happen within families. »

In Papatè’s opinion, documenting and archiving are only part of the solution. In order to allow the Anishinaabe culture to flourish within the arts community, it has to preserve its integrity in museum contexts. In 2013, Papatè contributed in developing a permanent exhibition at the Musée de la civilisation de Québec with La Boîte Rouge. The following year, he presented three of his films at the first edition of Dialogue, an exhibition held at Ma Musée d’art, Rouyn-Noranda. In 2015, he worked with Abitibi artist and poetess Sonia Cotten on an original creation within the framework of Dialogue II. In 2019, Papatè accepted to assume the role of Commissioner for Dialogue III.

« I believe that what I deliver is in organic form, whether it be through filmmaking or in exhibitions. I combine the organic world and the technological world, the Aboriginal world and the non-Aboriginal world. Exchanges are always profitable when people listen to each other. »

Papatè is the dedicated father of three children. He enjoys initiating them to art and their culture. With them, he started to explore painting and has developed a keen interest for this art form. 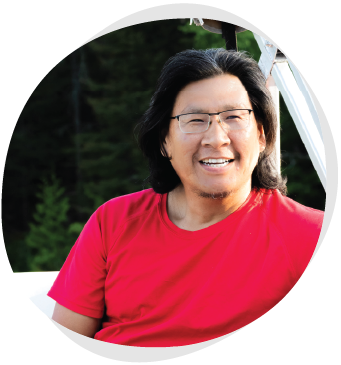