Claudette Happyjack is native of the Cree community of Waswanipi. Early in her life she developed a love of travelling. Her overwhelming sense of curiosity and irresistible desire for exploration led her to carve her own life path, an exceptional life path. She started painting during her time in the open plains of Saskatchewan; she took up again with painting when she returned to Abitibi-Témiscamingue. Her journey took her to Val-d’Or in 2016. When she saw the slim silhouette of black spruce, she felt at home and decided to settle there. It didn’t take long for Claudette to carve out a place for herself and leave her mark. Visitors can admire her characters in movement at Parc Bérard, where she participated in a vibrant collective work as part of a cultural outreach project called Orignal (Moose). She is involved with the administrative board of the Val-d’Or Native Friendship Centre. Today, Claudette has it at heart to inspire the Aboriginal youth to be proud of their origins and trace a future at their image.

In her early twenties, fitting the mold was something Claudette just could not consider. While many settled and started a family, she took the road to discover western Canada. She describes herself as the living illustration of the female characters dancing and wearing shawls she loves to paint, i.e., constantly in motion. At the birth of her son, she felt the time had come to return to her community. The young mother wanted her child to grow in his cultural environment and mother tongue. She offered him the chance she did not have in her childhood, having been raised in a foster home. Doing so offered her the opportunity to catch up with her mother, who taught her the art of beading and making moccasins and mitts. Though she has always questioned the established order, she feels closely connected to her culture and is proud of it.

“I’ve always been a positive person, and that’s what I want to transmit the young people. I want to teach them to do what they want to do and never let anyone discourage them. I want them to spread their wings and fly. I want the Aboriginal people to be proud of who they are.”

Claudette Happyjack is not one who lets herself be discouraged. When she moved to Val-d’Or, she spent the first three months on the streets before renting a room and, later, moving to the apartment where she now lives with her 20-year old son. She loves her new home; from her kitchen, where she paints, she enjoys watching the sun go down behind trees. Nature has never stopped inspiring her; she often returns to the woods to meditate, reconnect and revive her creativity.

“Life is an experience. Whatever the number of paths we take, we always end up learning, growing and discovering ourselves and that’s important!” 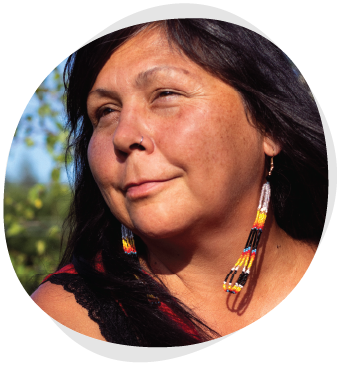