Carlos Kistabish is a painter and traditional dancer from the Anishinaabe community of Pikogan. His art reflects the culture that his father passed on to him: forest and diversity of life it shelters. In his paintings, he creates immense spaces enlivened by fine details and vivid colors, at the image of the Anishinaabe culture, spaces that he seeks to open up:  “I like my paintings to be big and reflect the greatness, vastness and complexity of my culture“. Although his professional career has led him to live in many different places in the region, Kistabish now lives in Amos with his dear ones, a closely-knit family…his source of joy and pride. Kistabish is now working on his first solo exhibition.

Carlos Kistabish was introduced to drawing at the age of 8 by his great-grandfather, Samian (Samuel) Mowatt. He treasures lasting memories of hours spent by Samian’s side. His great-grandfather used to draw animals seen in the forest on very small paperboards, and hand them to the boy. “Try to do what I just did”,  he would tell Carlos. Samian always kept small paperboards ready in cardboard tubes in anticipation of his grandson’s visits. The young Carlos learned to draw by replicating his great grandfather’s sketches. When Samian was not around, the young boy would draw animals from memory. At school, he spent a lot of time drawing. His class notes were invariably covered with sketches of animals from the forest. In his teen years, Carlos Kistabish was influenced by Harry Wylde. The Anishinaabe artist gave him drawings to reproduce, and took the time to show him drawings to reproduce and took time to show him how to draw in a special line and add detail in his drawings.

“Drawing took me on voyages of discovery. It always has. The same happens when I paint.”

It is not until he moved on to the CEGEP in Rouyn-Noranda, in the Arts Program, that Carlos Kistabish explored other mediums of art, and developed a fascination for the subjects taught and how colors can be mixed together to create a multitude of other colors. He discovered acrylic paint in the first session, which seemed to fit perfectly well with his flow of creation. Kistablish adopted it.

Carlos Kistabish considers culture and land to be two elements of an indivisible whole. He feels blessed to have had the opportunity to learn about life in the forest: hunting, trapping and fishing. He seeks to transfer his love for his native land and the importance of land in the Anishinaabe culture in each of his paintings. He hopes his art can help fight the over-simplification permeating the popular public perception of Aboriginal cultures, stressing that Pikogan is not a reserve, but a vast and lively land.

“I am Abitibiwinni. This is where I was born and raised. This land, our land, is of great importance to me. We live in confined spaces, and I find that very disturbing. This is why our land means so much to me […] I want them to see… as small as it may seem, I want them to see in my paintings just how extremely vast our living environment can be.

Today a father of three, Carlos Kistabish better understands the importance of pride and self-confidence in the process of self-development. Becoming a parent has helped him better understand the history of his community. Above all, he wishes to see his children grow and thrive in cultural knowledge and pride.

“For me, family is more important than anything else. We did it [we broke the chain]; it had to be done. Some families will have to wait until the next generation does it, or subsequent generations. But they will eventually do it. We managed to do it. “

Carlos’ daughters have started watching him paint. He gives them supplies so that they can practice their drawing skills, just as his elders did with him. His older daughter reproduces some of the things he paints, as he did when only a boy, and his second daughter creates out of her own imagination.

Introduced to traditional dancing in early adulthood, Carlos Kistabish has participated regularly in powwows since 2013. 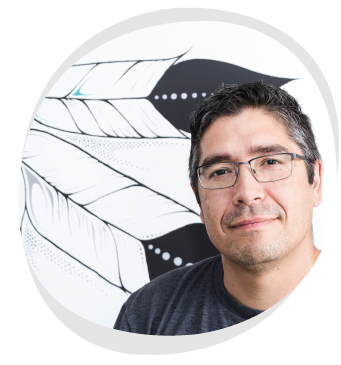