Branden Ratt is a cultural transmitter from the Anishinaabe community of Lac-Simon. After an apprenticeship with several leading figures in the Anishinaabe cultural scene, Ratt now works as a guide at the Kinawit Cultural Centre, where he can upgrade and share his knowledge of the Anishinaabe culture. Curiosity is not the only motivation behind the efforts of this apprentice artisan and keen learner. In fact, Ratt is committed to live in harmony with his cultural heritage through crafts and life in forest. He wants to pass on his native culture to the next generation of custodians. Ratt believes that creating a more just and equitable society is feasible by promoting and acquiring mutual knowledge.

« Enhancing the young generation’s learning experience is really what motivates me. Today’s children do not seem to know or appreciate their own culture and origins. So, one day, I said to myself: If no one gets the job done, I’ll give it a shot. »

Ratt grew up in Lac-Rapide, his father’s native community, until he turned 8 and moved to Lac-Simon. Raised in his native language, he never spoke French until he settled in his mother’s community. He had to learn the language to integrate his new environment, but his thorough knowledge of his native language enabled him to establish privileged contact with the elders who, like his grandmother, only spoke the Anishinaabe language and had many stories to tell.

« Language is a significant aspect of the learning process; it is part of our lives and culture. Culture is also a part of the language. Culture and language go hand in hand. They make you want learn more, for it is more difficult for an elder who can only speak the Anishinaabe language to pass on his knowledge to someone who doesn’t understand the language. It is important to pass on the language, culture and everything that comes with it to the young people. »

Because Ratt’s mother died when only a kid, his family played a key role in his education. His relatives lived in the forest, and he was exposed at a very young age to this lifestyle. His uncles and aunts taught him to recognize and use natural medicines. Ratt has never used commercial medication to treat a cold. He played at trapping lynx and beaver. Today, he enjoys sharing his experience with the young people and organizing occasional outings in the forest with children from Lac-Simon and initiate them to trapping and other traditional activities.

Ratt finds working with young people very rewarding. His natural ability to connect with them led him to complete training in youth work and join the Maison des Jeunes in Lac-Simon, where he worked with teenagers for more than five years before settling in Val-d’Or to be closer to his children. Because he wants his sons to be as fortunate as he was when growing up, Ratt encourages his father to take them with him in the forest and talk to them in Anishinaabe. He also continues his apprenticeship from seasoned artists, artisans and craftmen like Alexis Weizineau, Karl Chevrier and Roger Wylde. He wants to broaden his knowledge to become fully autonomous. One day he would like to teach how to make a canoe and what he has learned.

« I appreciate where I am in my life. All I have learned so far prepared me for this. I still don’t know exactly who I am, and pursue my learning process. Today, I take pleasure in rediscovering my culture. I still have a lot to learn, and eventually I would like to pass on all I have learned in life to others. » 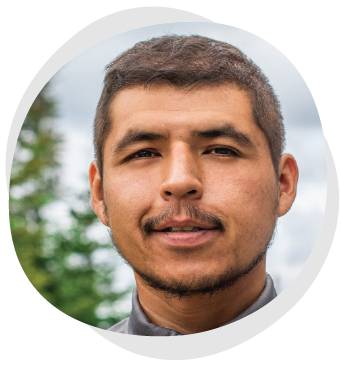