André Mowatt is a cultural guide and educator from the Anishinaabe community of Abitibiwinni, Pikogan. In teaching “the other side of the story”; he feels strongly that it is possible to bring society to question received opinions. He considers that each question is an opportunity to meet others and initiate dialogue. Mowatt, accompanied by his mentor Major Kistabish, has contributed to the tourist development of his community, where he has been working for 20 years on transmitting culture, history and traditions. Not only his work has led him to raise the awareness of many visitors of all age groups on these issues, but it also has provided references and guidance to the members of his community. Mowatt is really concerned about the young Anishinaabe generation knowing and understanding their history.

« I do my share toward the reconciliation of peoples. This is what we need in Canada, and I do it my way. […] My goal is to make us known, and I do so via tourism and culture. »

Mowatt’s stories are grounded in the privileged experience of a man who witnessed a turning point in history. He lived a nomadic life, in the forest, with his parents until the age of seven. His father continued to carry out trapping activities after the forced sedentarization of the Anishinaabe people by the implementation of compulsory schooling. The young Mowatt was obliged to attend residential school; his mother found a place to stay near Amos to remain close to her boy. The disruption in their way of life was a hard time for the entire family. When he was away from residential school, he was his mother’s interpreter, since she could only speak Anishinaabe and her writing skills were limited to signing her name. “At this young age, I had to learn to say the truth. I had the opportunity to say just about anything to my mother and have her sign, but no, no, no. I was about 8 or 9 at the time.” At school, when asked why his mother never attended parent meetings, he would say: “Do you speak Algonquin?” He remembers that the school staff knew nothing of the reality of their Anishinaabe neighbors. As a result, they could not understand the load of responsibilities their Aboriginal pupils had to carry in order to learn French. When telling his stories to visitors, Mowatt hopes to make that situation change and that future generations can live together in a climate of mutual knowledge and respect. When teaching historical material absent from textbooks, he hopes to start a dialogue on a more equitable basis.

André Mowatt is still actively involved in developing culture and tourism in Pikogan. He is very pleased to see more and more visitors from outside the community attend powwows. He hopes to see such gatherings increase in number. He welcomes groups in Pikogan, but he also gives lectures in schools, cegeps and universities.

Mowatt takes us to the Harricana river and tells us about his identity (French).

Conférence 1 : The Other Side of History (French) 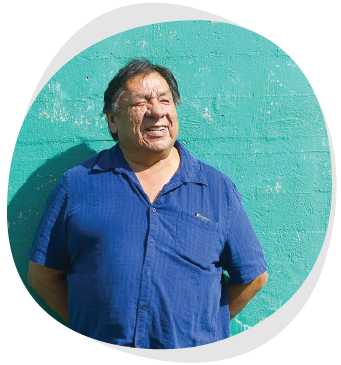