Roger Wylde is an accomplished artist from the Anishinaabe community of Pikogan. His sense of curiosity and taste for challenge, which he developed in his youth, have led him to step onto the stage and become an Anishinaabee pioneer of professional theatre. Roger has exhibited his work, taught traditional arts and crafts, and been involved in filmmaking. His versatility is nurtured by strong determination to embody, promote and disseminate the values of his culture. This has prompted him to become involved with the community radio station of Pikogan. Through his participation with the Productions du Raccourci theatre company in the production of a short play broadcasted in his mother language on the radio, Wylde supports cultural transmission with modern media tools. In his opinion, self-knowledge is the cornerstone of creation, arts and identity evolving in synergy. Throughout his career, Wylde has paved the way for younger generations and relentlessly questioned conventional thinking to make arts more inclusive and respectful of Aboriginal values. Minwashin, of which he is Vice-Chairman and co-founder, would not be the same organization without his experience and wisdom.

« One should never forget what our elders have taught us. We must continue to apply this knowledge and succeed in defining ourselves through creation. »

In 1988, Roger joined the theatre company Ondinnok in Le Porteur des peines du monde. His débuts in professional theatre coincided in time with vocal and drum performances in various venues throughout Québec and Europe. These experiences opened his eyes to a new world of possibilities, and Roger dove right in. Ondinnok became the starting point of a new circle of acquaintances and friends that has never stopped widening, like ripples from a stone thrown in the water. His interpretation of Gabriel Commanda in Val-d’Or vous raconte son histoire left no one indifferent; he will resume his role for a third consecutive year in 2020.

« Even when I don’t know where I’m going, I always dive in. Whatever the project. No one should fear the unknown. Whether or not we succeed, the experience is always rewarding. I rely on my values as an Anishinaabe and transmitter of knowledge. »

According to Wylde, it is essential to know one’s identity and origins to be able to be oneself. The know-how-to-be is the living core of any culture and the caretaker of authenticity. His art practice is aligned and consistent with this philosophy. In his opinion, art opens the door to culture and its universe of knowledge, traditions and values. This is how art builds bridges between people and cultures, between the self and one’s heritage.

His children are a great source of inspiration to Wylde. When only a kid, applying certain aspects of his culture was considered a taboo in his community. He would like to contribute to making it a source of pride and self-confidence for the younger generation. Just as his friend Denis Kistabish, who brought drum-playing back in his life, Wylde revives traditional Anishinaabe knowledge to best transmit it to the younger generation. He works leather and wood and makes drums and clothes. He has conducted several workshops intended for young people and given drum-making and tanning courses.

« I always say that once you master how to make clothes and work leather, you know your history. People have worked leather for thousands of years. I consider myself very lucky to have learned all that from my parents and elders. » 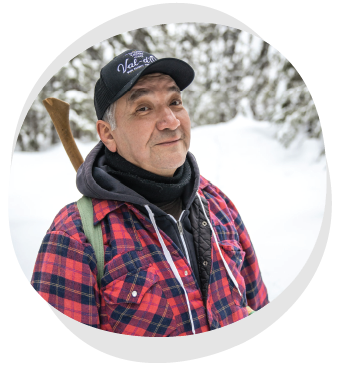