Rodney St-Denis, a seasoned artisan with more than ten years of experience, comes from the Anishinaabe community of Kebaowek. Curious and creative by nature, he knows how to handle a sewing needle as well as a wood chisel. In his free time, you will find him in his garage, totally absorbed by one of his many ideas, or in the forest, collecting raw materials for one of his numerous projects. You may also see him conducting a craft workshop. St-Denis uses his cultural knowledge to create spaces of exchange and healing in and outside his community.

« I would like to strengthen cultural awareness so that culture can have a place in society. »

For St-Denis, everything started with a very simple question to his grand-uncle: where could he find wood to make a pair of snowshoes? The elder pointed at the forest and accompanied him. On that day, his grand-uncle taught him to recognize tree species and cut the wood of each species to make flexible wood strips. He then took Rodney to his garage where, step by step, he guided him in making his very first pair of snowshoes. In the years that followed, the two men would meet regularly in that very same garage to carry out all sorts of experiences with wood and bark. St-Denis remembers the day when his grand-uncle showed him how to boil water in a bark basket. Fascinated by what he saw, he knew he was hooked. Years later, the clever techniques used by his people and the simple happiness he finds in the forest when collecting raw materials have not lost their shine and beauty to his eyes. This is why sharing his knowledge with others is so dear to him.

St-Denis worked in diesel mechanics in his early adult life, but had some doubts about his career choice. After witnessing several work-related accidents, he decided to continue his schooling through adult education programs. This had multiple impacts on his life. He made his very first tikinagan at school, and was immediately seduced by this craft object, which revealed the strength of the principles underlying his culture. He also participated in his first workshop on addiction. He learned about traditional medicine and ceremonies, which helped him better understand the history of his people and realize that there is room in his life for hope. He was profoundly touched by what he learned at school and once he graduated, he continued with the National Native Alcohol and Drug Abuse Program for six years in his community before becoming cultural advisor for the Program. Rodney St-Denis profoundly believes in the healing power of culture.

St-Denis’ creative spirit is constantly bubbling. He still enjoys experimenting with various materials and never runs out of ideas. Creating and working with his hands have a calming, soothing effect. Crafting operates like meditation, and he shares its therapeutic effects in his workshops. His objective is to offer others the opportunity to understand and appreciate their culture, and to reconnect with their identity. He dreams of the day he will be able to dedicate himself fully to it. He is convinced that crafting – and the manner crafting brings persons out of their comfort zone to create something beautiful – generates pride and better self-knowledge. 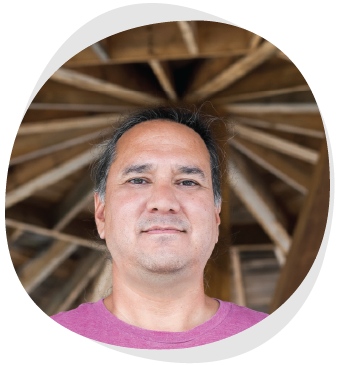