Marilyn Chevrier-Wills is an Anishinaabe cultural educator from the community of Timiskaming First Nation. Her spiritual name is Kishkatekwe Dishnika Mandodem (Moonlight Woman of the Clan of the Loon), but she is best known by most people inside and outside her community as “Grandma Marilyn“. Actively dedicated to the transmission and practice of her culture, Marilyn plays the role that Anishinaabe grandmothers have played for time immemorial. When not involved in the organization of events or ceremonies for her community, she is visiting an early childhood center in the region with her drum in her hand. Kokoum Marilyn has become a prominent figure of Anishinaabe cultural life.

“Now that I know who I am, what I am, I am very proud today to say: I’m Native. I want to help now; give back some of what I have received.”

Marilyn performs many different ceremonies. Each month and wherever possible, she organizes a Full Moon ceremony for women who feel the need for it. She conducts water and berry ceremonies, but also teaches how to conduct them. She accompanies groups during fasting retreats in the forest. She also travels across the region to acquire more knowledge. Together with her husband, she created a place in Timiskaming First Nation where people from within and outside her community come to attend ceremonies, feasts and cultural events. Her didactical material is always within easy reach; she is always willing to sing a song to the beat of her drum. She regularly visits schools and early childhood centers of the region, whether Native or non-Native, to share teachings. While she believes that part of the road to healing is the same for everyone, she is convinced that it is through education and sharing that one attains understanding and mutual respect.

“I didn’t know there were ceremonies for the moon. I’ve always talked to her; I’ve always communicated with her ever since I was a girl, but I had no idea there was a full moon ceremony!”

Marilyn’s childhood was spent at a time when Anishinaabe culture was implied, barely expressed. She occasionally saw her father purify himself with sage, but no one ever explained to her the meaning of this ritual or told her it was part of her heritage. It was not only until she reached adulthood that she finally understood why her grandmother – who never smoked – always carried tobacco. Everything was taboo, kept silent, by fear, tainted by the traumatic experience of repression and residential schools. When she started school in Notre-Dame-du-Nord, Marilyn became aware of her Aboriginal identity. One day, she ran away from the school yard, because the other children refused to play with a “dirty Indian”. This left the little girl with a heavy heart for many years, but she always kept a willingness to learn and live a full life.

Determined to pursue her education, Marilyn completed a degree in social work and Aboriginal studies at University of Sudbury; this enabled her to make a fresh start. In her first year at university, a teacher showed a video about the Oka Crisis. Marilyn was deeply shaken by what she saw. She recognized a few of her relatives and could not believe that she had no knowledge of her people’s situation. She decided to seek help from a counsellor, who referred her to the Sudbury Native Friendship Center. On the following Wednesday, she attended the Women’s Circle weekly meeting for the first time. She discovered a community, to which she returned regularly; what she learned on traditional medicine and Aboriginal spirituality had a healing balm effect; she had never felt such a sense of belonging. When, shortly later, she started to work as head cook at the Healing Lodge, she didn’t expect to find her own healing path. She was introduced to traditional healing and discovered the saving power of culture and spirituality. Today, Marilyn is committed to imparting this to her people.

Marilyn wishes to share her knowledge to other communities. She would like to travel more across the region and sow the seeds of a happier and healthier future for all. 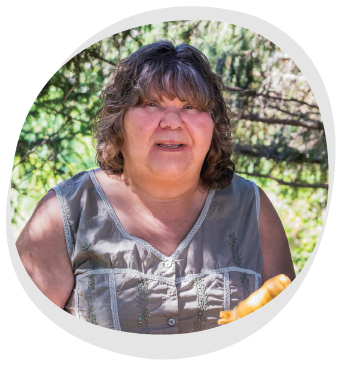