Marie Anne Cheezo is originally from the Anicinabe community of Lac-Simon. She made her very first dream catcher in the late 1990s, during a workshop offered in San Diego during a conference. Since then, she has continued to learn on her own and her giant dream catchers have travelled around the territory. Each piece is an opportunity for her to experiment with new techniques, and each encounter, to deepen her understanding of the dream catcher and the principles it symbolizes. She is proud to practice an element of her culture and to share it by bringing happiness and comfort to the people who adopt her creations. The originality of her work, carefully thought out and personalized, and her distinctive style show what an accomplished craftswoman she is. Today, Marie Anne’s works can be found in many homes, businesses and public places in the region.

Marie Anne was born to a Cree father from Eastmain and an Anishnabe mother. She lived near Rapide-7 until the age of seven, when her health condition forced her to leave the residential school and her family to access medical care in Montreal. She was 14 years old when she returned to live in her community at Lac-Simon. After eight years without any contact with her family, the teenager realized that to reconnect with her mother tongue and culture, she would have to make a lot of efforts. Even though she did not always understand what they were telling her, she would go to meet the Elders. She would try to pronounce the words and they would correct her. Patiently, they taught her the Anishnabe language again, as well as her culture:

« Without your language, you lose your identity. For me it was important to rediscover who I am. Before, in Montreal, I was lost. Everyone told me I was an Indian, but I didn’t even know what it was. I was among white people and I was all alone there. »

It is Marie Anne’s turn to transmit her knowledge about the dream catcher to different age groups. It is important for her to provide the younger generation with opportunities to understand their culture and develop a sense of belonging. She hopes that her own quest for identity can help others discover and be proud of who they are.

When she was living in a foster home in Montreal, she was forced to adopt French as soon as possible. Still too young to really understand what this meant, she learned this new language and forgot her Anishinabe language, the most important one for her. Later in life, Marie-Anne returned to Montreal to study law. Once again, she lost an important part of herself there: her relationship to her Anishinabe culture. On a trip to San Diego with her sister for a conference, she was attracted to a dream catcher workshop: “I wanted so badly to learn what it was!” she recalls. That workshop planted the seeds of a passion that has been with her all her life and helped her regain her identity.

Marie-Anne then gave her first workshops in elementary schools in Montreal and dedicated more and more of her time to the production of her own creations. Since then, Marie-Anne’s spirit has been in constant motion; she continually imagines her next works and finds inspiration everywhere. Each of her dream catchers, which she purifies with sage, is unique and reflects her meticulous attention to details.

She collaborates more and more with her daughter Branda, who has also been introduced to handicrafts and continues her apprenticeship with her mother. Marie Anne’s resilience is matched only by her thirst for life: “There is nothing that stops me yet, because I am proud to be Anishnabekwe and because life is beautiful!” 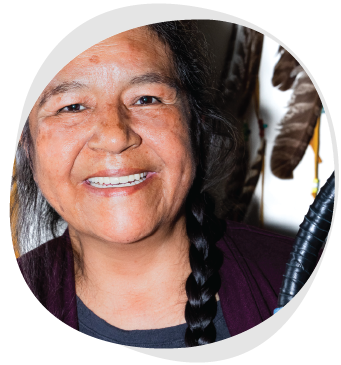