Jessy Anichnapéo is a wood craftsman from the Anishinaabe community of Kitcisakik. Though he specializes in making customised axe handles, he also plays violin in dancing parties. Anichnapéo personifies Anishinaabe resourcefulness and curiosity. In the course of his life, he has learned a wide range of artistic and cultural practices thanks to his great observation capacity.

Anichnapéo was initiated to woodcraft at a very young age. The boy just couldn’t stay put and always needed to keep himself busy. Surrounded by the forest for as long as he can remember, this ability came naturally to him. He learned from his father, but his best teacher has always been the forest. In his view, knowledge of the forest is a significant aspect of his approach, and he hopes to make the young generation aware of this.

“Sooner or later, if the youngsters keep being supplied with ready-to-use material, they will never learn to choose the best kind of wood to make tikinagans, axes or snowshoes. They just won’t know. This is why it is important to begin at the beginning: go into the woods, cut a tree, etc.”

Telling the difference between wood species and learning where to find them are part of his culture, and Anichnapéo is very proud to have acquired that critical knowledge. He has learned to appreciate the value of the Anishinaabe traditional knowledge by interacting with elders. Each summer, for eight consecutive years, he travelled in their company from his village to Grand-Lac-Victoria: he took care of the site, cut firewood, repaired whatever was broken, and most importantly, listened to them. Spending summers at Grand-Lac-Victoria proved very enlightening. He remembers the day his father showed him and other kids how to make oars. Inspired by shared stories and recollections of his father and elders over the years, Anichnapéo wants his community to continue using this method of knowledge transmission. He wants to practice his culture by making traditional tools, but also considers important to give today’s young people the opportunity to do the same.

Anichnapéo started playing music at about 14 years of age. One uncle owned a guitar and let him play it. The teen enjoyed mixing sounds, without knowing that he was creating his own arrangements of music. One day he found a tablature music book and used it to continue making progress. He learned to play violin by ear. His talent for music came as a gift to his community, for he soon made others benefit from it. He learned to play jigs because he liked making people dance.

During the day, Jessy Anichnapéo uses his knowledge of the forest and Grand-Lac-Victoria area, where he works as a brush cutter. In the evening, he explores his music instruments, sculpts wood and takes care of his family. He takes orders and plays music in dance evenings and other events. 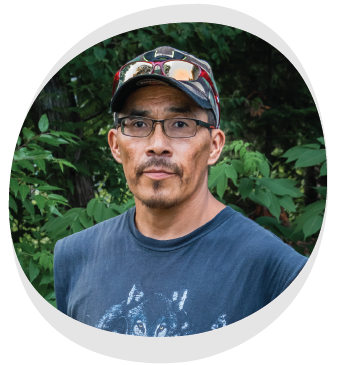