Ivan Pascal Brazeau is a singer-songwriter-composer from the Anishinaabe community of Lac-Simon. He caught the music bug somewhere around the age of 15; his instruments have always traveled with him. He wrote his first songs in his early 20s, hoping to compose music that reach out to the members of his community, with rhythms that make their heart beat and lyrics that are representative of who they are. He proved to be a talented songwriter and the people around him encouraged him to write in his mother language. His songs found significant success, and he soon collaborated with the popular band Anishinaabe to record them. As Brazeau puts it, music has always been a means to bring the people around him together and promote his culture. His vision translates into a creative approach that is both stimulating and mobilizing and reflects his willingness to offer his people opportunities to express themselves. Brazeau has kept a special place in his heart for the elders, their ideas and knowledge. Today, he would like to involve the younger generation.

« Anicinabemoan. I would like our people to understand and use our language at home. […] There are other Anishinaabe communities who do not use their native language. I would also like to involve other youth. There are young people who have talent, love music and want to make music. »

Brazeau sings and accompanies himself on the guitar, but he also plays the piano and bass guitar. He began playing the guitar after he found an instrument left behind at his cousin’s place and became fascinated by its broad spectrum of sound possibilities. Later, he found a book of guitar tablature and used it to learn the basics of guitar. In his teen years, his interest for music grew into a passion, which over the years transformed into a mission. Brazeau wishes to use his gifts as a musician to develop projects capable of bringing the members of his community together, but also to write songs that reach out to all the Anishinaabe communities and help them speak their native language on a daily basis.

« [Playing music] has a therapeutic effect on me. »

Brazeau wrote and composed his first songs in his early twenties, in French, chiefly to entertain the people around him. His music moved them much more than he had expected. It gave him a powerful means of expression and the strength to address problems around him. His community suggested that he should write in the Anishinaabe language. He was always able to rely on their support whenever in doubt and turn to an elder when unable to find the right word. At the beginning, writing in Anishinaabe did not come easy, but he persevered. When he saw how people around him reacted to his work and the emotion generated by his songs in the Anishinaabe language, he became more confident. He wrote his first song in the Anishinaabe language in 1992; it was called Moshum (grandfather). He wrote several songs to get the young people to reflect on various aspects of life. Today, Brazeau tries to write about Anishinaabe cultural practices with the aim of documenting them and promoting their beauty.

« I write about our traditional activities, for which the young people have less motivation in pursuing. These activities are in the process of being forgotten…especially trapping. »

To compose his music, Brazeau brings together members of his community, and asks them to share memories; he pays particular attention to their concerns and ideas. Music is like cultural knowledge: experience takes its full meaning once shared and disseminated.

In the fall of 2019, Ivan Pascal engaged in vocational training studies in ore processing. He is fully committed to being a father to his children and to making music more accessible to the youth of Lac-Simon. “First, we must try…always!” 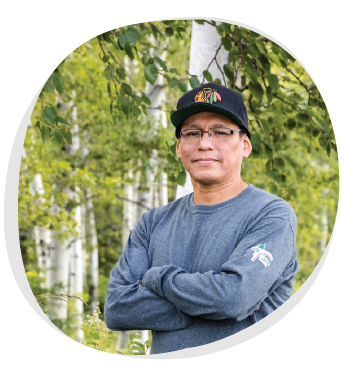