Hank Rodgers is an experienced traditional Anicinabe artisan from the community of Winneway. It was while taking a craft course in Timiskaming First Nation, where he has been residing since the late 1970s, that he discovered a talent for manual work. Hank masters beadwork like no one else and his leatherwork, moccasins, mukluks and mittens are recognizable by the fine embroidery they feature. His creations once travelled all over the province to be exhibited and sold from Quebec City to Cree territory. Today, Hank wishes to pass on his know-how to the next generation of artisans.

« I would like to see the younger generation learn this kind of work. I think it’s important that they learn, because someday, I will be gone and who will continue to do this work? The young people! »

Hank was introduced to Anicinabe craftsmanship from his early childhood through birchbark work. Raised in the forest with his grandparents, he often had the opportunity to observe them at work: his grandmother made baskets and his grandfather, miniature canoes. They would invite him to sit next to them and he would carefully follow their hands with his eyes. Hank was an adult when he resumed their practice, but he could remember his grandmother scratching the bark to design patterns. He taught these same techniques in workshops on many occasions and his grandmother’s designs, adapted to his own style and reproduced over and over again, still decorate his offering baskets.

« When I go back to Winneway, when I go back on the lake, memories kick in. I see where I grew up and where I’ve been with them, my grand-parents, and it’s just like yesterday and the day before. »

Over the years, he experimented with all kinds of materials and techniques: designing dream catchers, carving soapstone, making drums, carving moose antlers, etc. He also worked with a number of other artists and craftspeople. One winter day, his mother approached him and asked him to help her sew something. Hank was immediately interested and sewing came very naturally to him. He started designing dresses, mukluks and leather jackets, which he decorated with embroidery and beads.

Still to this day, Hank returns to his crafts as soon as he gets home from work and can work quietly until the middle of the night. He loves details and realism. He embroiders animals and plant motifs as he observes them in the forest. This year, Hank wishes to build his first large birchbark canoe and learn how to make the tikinagan (cradle board), which he imagines already decorated with his characteristic bead patterns. Craftsmanship satisfies his need for calm and beauty and taking up these subtle challenges makes him very proud. His greatest joy, however, is to be able to pass on his knowledge to his daughter, who gradually takes up the torch. 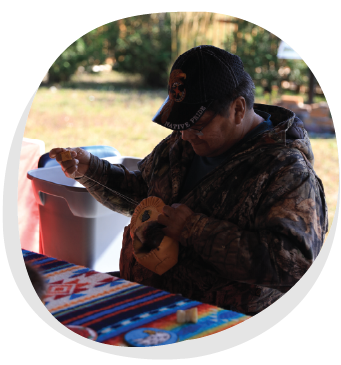