An Atikamekw artisan from Obejiwan, Alexis Weizineau is known throughout the region for making drums of exceptional quality and creating unique traditional objects made of materials found in nature such as moose antlers and bear claws. Weizineau learned at a young age how to harvest and work these raw materials. His father used to take him to the forest several months a year – sometimes challenging the authorities – so his son could grow up next to his grandfather and uncle. This is how the young man learned how to hunt, how to trap and how to tan hides; once in adulthood, Weizineau developed his very own techniques. In the 1990s, he discovered a true talent for arts and crafts: he gained confidence and put his life in order. Today, he wants to help others discover their own talent and full potential.

« Just knowing that I was capable of doing things with my own hands helped me a lot. That is why I hope others will uncover their own potential and develop a willingness to discover things by themselves and cope in everyday life. »

Driven by a determination to bring change into his life and regain health, Weizineau turned to drawing and painting; he soon discovered a talent he didn’t know he had. He started by painting logos and landscapes on pieces of commercial leather, which he sold to band councils, police services and individuals. He acquired a special interest for leather work and tried his hands at making miniature drums and rattles. Though his natural gift improved quickly and the people around him valued his work, he felt the need to explore other materials. Commercial leather was expensive and seemed lifeless to him. Having acquired crafting skills and experience over time, he started tanning moose skins. He had to revisit his childhood to replicate the techniques and gestures he had seen his father and grandfather repeating when they spent time together in the forest. Relying solely on his memory and ingenuity, he made his very first drum. The durability and rich sound of the instrument for which he is best known is the result of years of work, perfecting his methods through trial and error and exploration of various materials. Craft-making opened his eyes to his immense creative potential and enables him to maintain close contact with nature, where he can spend days alone, except for the companionship of the tranquility of the forest.

« I love spending time in the forest. It’s calm and quiet. »

The techniques and natural materials employed by Alexis Weizineau’s ancestors are the pillars on which he has developed his talent and craftmanship and made himself a fine reputation. Today, he conducts workshops to pass on his knowledge and philosophy to whoever wishes to learn. He wishes to share his know-how to the greatest number of people. He takes great care of his tools, which his grandson will inherit; the teenager has been learning from his grandfather since his boyhood, the same way Alexis learned from his own grandfather: through observation.

« One day, my grandson will become my associate, Weizineau says proudly. But in the meantime, I still have a lot of things to show him! » 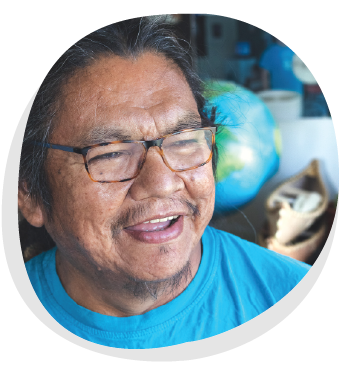