Agathe Denis-Damée is an artisan from Senneterre known for the finesse of her bead embroidery and the originality of her dream catchers. Raised in the forest with her parents, Agathe was taken from her family at the age of six to be sent to the Saint-Marc residential school. Craftwork offered her a path to healing, but also a way to reconnect with her heritage and revisit her memories of the “good old days” when she lived in the wilderness. Her creations, inspired by her connection to the forest, are intimate witnesses to her attachment to her culture. Today, Agathe wishes to contribute to the well-being of others through her social commitment and her craft work. His meticulously crafted works are in demand throughout the province and were exhibited in Montreal during the First Peoples’ Festival. She is also involved with the Board of Directors of the Senneterre Native Friendship Centre.

« It’s a rebirth I’ve experienced. I know it was the Creator who helped me. »

Agathe was born to a Cree mother from Waswanipi and was raised among the Atikamekw, whose language she speaks. Her grandfather was from the Anicinabe community of Kitcisakik. She spent her childhood travelling all over the territory and she has fond memories of her nomadic life. She and her family lived entirely from nature as they moved with the seasons. This period of her life remains her most important source of inspiration. She likes to revisit the places where she lived in the forest, both on foot and in her thoughts, in order to create works that are faithful to her heritage:

« When I do crafts, I go into the woods a lot. I go around to places I’ve been before. It’s inspiring to have grown up in the forest, you don’t forget that. I feel lucky to have been raised in the woods. »

Agathe woke up one morning after having a dream of rare clarity: in her dream she had woven a dream catcher that imitated the pattern of a spider’s web. As soon as she woke up, she grabbed her equipment and made a dream catcher in the image of the one she had seen in her dream. Her work can still be recognized by this unique weave which testifies to the creativity of her approach and the depth of her connection to nature.

Agathe is a curious woman who likes to learn on her own. She learned handicraft through observation and experimentation from an early age, but did not return to it seriously until much later, in adulthood. Taking up the craft again had the effect of therapy and helped her recover from her addiction problems. When she makes jewellery, moccasins or dream catchers, Agathe feels that she is reconnecting with her identity and she feels good. By awakening memories of her childhood in the forest to permeate her creations, Agathe has gently made peace with her residential school experience. Today, she shares her know-how with her community through workshops. Each of her creations reflects this same desire to invest positively in others:

Agathe accepts orders and offers workshops for teenagers and adults. She can be reached through the Senneterre Friendship Centre. If she doesn’t answer, it means she’s in the bush! 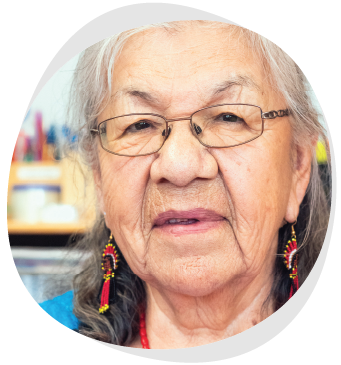