Sky Polson is a traditional Anishinaabe artist-painter and sculptor best known for his innovative techniques. His fresh and resolutely contemporary style expresses the Anishinaabe culture in its most vivid and textured form. Polson draws inspiration from life experience and stories told by people around him; he creates works of art where symbols of Anishnaabe imagery are front and centre, never missing to strike a sensitive chord. Art is Polson’s way to share his culture with the world, a bridge between people, a meeting point for returning to the essential. His art has travelled all over the region, province and country, punctuating the impressive career of an authentic and well-accomplished artist.

“I think it’s essential for a Native person to know their history, to get back into the culture, because it makes them understand who they truly are.”]

Polson handles acrylic paint in the same way as if sculpting wood or stone, giving it substance and movement until his works seem to come to life. Each one of his artworks is for him an opportunity to revisit an event that occurred in his life or to get to know people by asking them questions about their life. Polson creates scenes where ancient symbols of Anishinaabe culture and history meet and blend with the artist’s experience of the present.

“I like to paint things that are a representation of my culture, of something I’ve lived through. This way, there is more of a connection to grab on to for people. Personally, I always try to make that connection with my culture, [because] I want to create paintings with a real connection to people.”]

Although he grew up in an urban environment, Polson has always felt connected with his Anishinaabe heritage. He owes this to his aunts, who were first to introduce him to cultural symbols and practices that sparked the boy’s imagination and remain present and significant in the mind of the adult he has become. Polson remembers when he became aware of his distinct culture; he was only four or five and visiting his aunts in Winneway when his attention was drawn to a feather and images hanging on the wall. He questioned his aunts about the objects and the eye-opening stories they told him piqued an interest that has never stopped growing.  When he reached adulthood, Polson learned about Anishinaabe ceremonies, which helped him adopt a healthy lifestyle. Spirituality has played a key role in his life and continues to have positive influence on his art practice:

“When I’m painting something in regard to a ceremony, I find that there’s more ideas coming through my mind; My mind feels clear and I can see what I want to paint.”]

Sky Polson continues his education through the National Native Alcohol and Drug Abuse Program; he wishes to make his knowledge profitable for his people by generating opportunities for young people to discover and express their potential. Polson considers art as a vehicle of choice for learning about one’s culture and nurture pride. Jointly with entrepreneurs from Maniwaki, Polson would like to open an art gallery where Aboriginal cultures can be showcased and people can meet and get support. 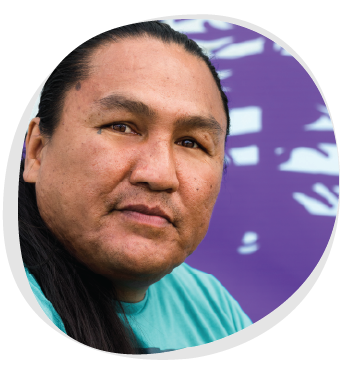